Lucy Carol Davis grew up in the 1950s and ’60s in a part of Charlotte, North Carolina, that was still a swathe of lush, undeveloped land. Every day, she would ride her Shetland-Arabian pony, Spot, into the forests, disappearing from her family’s sight for hours. 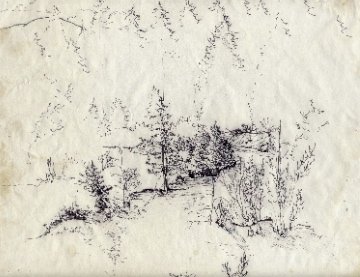 A kind of visionary and creative zeal runs in Lucy’s blood.

”My grandfather supervised the construction of the Blue Ridge Parkway, and my dad invented roadside campaign step-stakes, to name a few things,” she says. “I grew up seeing my father work on construction projects and manage his wholesale paper company.”

Lucy’s heritage, along with her rank as the eldest of four children, gave her an early sense of entrepreneurial leadership.

“Everyone looked to me for decisions,” she says. “As a child, I used pine needles to design blueprints for forts that I built with friends. I was also an entrepreneur and would fill up bags with dirt and sell them to my neighbors! And I wrote, directed and produced plays for the neighborhood. I charged my friends’ parents a small fee for admission.”

Unlike her siblings, Lucy had precocious wanderlust. She felt stymied in her local public school. In drama class, one of her teachers told her she could never be an actress, that she had no talent, so she detached herself from her surroundings.

“I used to draw and daydream in many of my classes,” she says. “I am sure I missed a few important points, but not many. Most of the material of grammar school was simplistic in presentation and content.”

“I concluded early that I would rather work for myself or be the boss,” she says. “It’s better to remain in the lion’s domain.”

Luckily, in 10th grade, Lucy was able to transfer to the North Carolina School of the Arts in Winston-Salem. She finally felt nurtured, given agency, at school.

“I was fortunate in that my teachers never assigned the same reading to all of the students but selected individual books for each one,” she says.

She studied how to play stringed instruments like the guitar until she graduated in 1968, which inspired her to major in music, philosophy and art history at Swarthmore College. After graduating from Swarthmore in three years, she chose to study architecture at the University of Oregon. It was an excellent architecture program and also an economically viable option, and her business-man father and homemaker mother had raised her with pragmatic values. 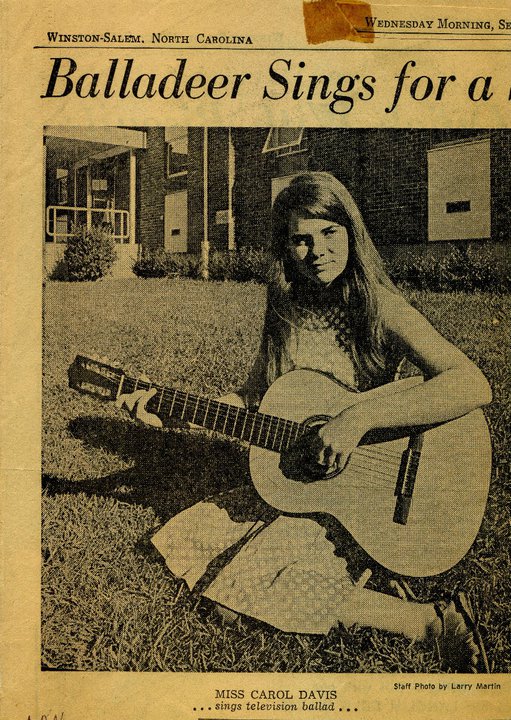 In the middle of grad school, Lucy traveled abroad to Auckland, where she studied revolutionary geothermal technology and did award-winning work on the first nationally recognized historic preservation project in New Zealand. She also ate a great variety of sheep meat!

Later, she served as a student member of the admissions board for the University of Oregon graduate school, where she learned that less than 1 percent of the architects in the US were women.

After graduate school, Lucy’s first job was to build “a time-out box out of plywood for unruly kids who had some problem or another like ADD, although that wasn’t identified back then.”

From plywood boxes, she moved on to buy damaged real estate that she tore down to build and sell her own designs. She earned  her first million through these early projects, at the time as rare a feat as becoming a female architect. She was in her early thirties.

Experience at school and on the field alike convinced Lucy that architectural students must develop their innate fluency with spatial concepts.

“When I reviewed applications for grad students in architecture, one of the things we discovered was there didn’t seem to be any correlation between grades and scores and success in architecture. We kinda figured that persistence and motivation were very important. But later I really concluded that one’s ability to conceive of three-dimensional spaces was probably the most important thing for hiring architectural interns or technicians to work with me.” 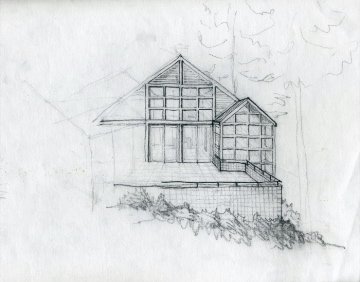 “To go into design  you have to be able to hold the whole space in your mind,” she says. “This idea is diminishing as people are using computers in their design, because computers are somewhat of a crutch that allows someone to shore up their inadequacies of imagination. But it’s much easier for me to arrive at a successful design solution in my mind than using contemporary computer technologies,” she says.

But she also concedes that she’s long been fascinated by modern design technology, which has progressed rapidly since the 1970s. She says she understands its creative potential. She often sketches designs from her imagination and then manipulates these designs through computer programs like ArchiCad.

“Although I use sketching as a primary design tool, I do find insight from subsequently computer-generated models,” she says.

Computers are mainly a recreational retirement pastime these days, and she’s often fiddling with her Apple computer, checking out inspiring innovations, artworks and people, including the Apple creator. She has admired Steve Jobs ever since she went to a Byte Shop on East Franklin Street in the late ’70s.

“It was upstairs where Hector’s used to be, on the corner near the post office,” she says. “They had all the early computers — Apples, Ataris, Commodore Pets, and an amazing – for the time – program called Eliza, which  was a simulated psychotherapy program. I used to go up there and play with the  computers.”

She says she then tried out a LISA computer and bought the first Mac in 1984.

While Jobs adapted his minimalist aesthetic from calligraphy classes he took at Reed College in Oregon, Lucy’s creative work was inspired by Japanese design, haikus, her minimalist approach in analytic philosophy.

“Less is more in philosophy, but less must be original, analytic and elegantly expressed,” she says.

In 2009, Lucy was interviewed on national television about her other source of inspiration — REM sleep. On CNN Anderson Cooper, she and dream researcher Deirdre Barrett talked about how Lucy’s dreams were the source of at least thirty of her best designs.

Lucy’s home, one of her masterpieces, is a sum of all of her inspirations. She focused on the effect of natural and artificial light on wooden surfaces and empty spaces. An effulgence ambiance results from the light’s reflections on the house’s reddish, warm, unstained cherry and lighter yellow fir. The light itself is white but mixes with the warm wood so the limbs, spines, rafters and walls seem like a single golden, breathing body. 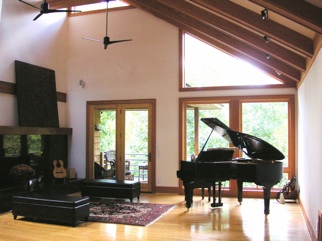 All the private spaces Lucy designs (Weaver Street, Farmer’s Market, the original design for the courtyard at Vimala’s Curryblossom Cafe and others) are oriented around “a central, light-filled atrium or open courtyard, enhancing a sense of community. A harmonious palette of colors and textures emerges through an interaction of material with light, resulting in comfort.” Tellingly, Lucy’s Yamaha Grand piano sits in the atrium of her house, and she loves hearing her son play it.

Besides many private residences throughout the nation, Lucy’s designs also include Weaver Street and surrounding areas, the Carrboro Farmers’ Market, Montessori Community School in Chapel Hill, approximately 80 acres in downtown Shallotte, North Carolina, and parts of the interior of The Art Center, a “unique not-for-profit community gathering place” for Orange County, she says. 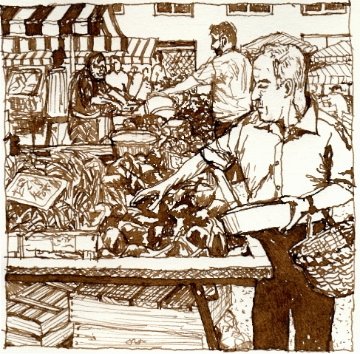 Wherever she has worked, Lucy has innovated green spaces that merged with residential and cultural spaces in a way that guaranteed a robust community.  If not for Lucy, Carrboro wouldn’t be the famous hippie attraction it is – the nation’s most pedestrian-friendly city, fanatically green, socially restless, and low in crime. She knitted together the elements conducive to communal activity in tree-adorned circular structures, ensuring that every alleyway and road was brightly lit and friendly to bikers and pedestrians.

Lucy was one of Carrboro’s handful of urban planners back when The Station wasn’t a bar but her office. She worked with NC State professor Georgia Bizios to develop the design guidelines for design Carrboro, which won the NCAPA Small Community Outstanding Planning Award. When she worked in the station boxes, The Arts Center was just the twinkle in the eye of a local man near her office, who was single-handedly trying to build an art center out of a warehouse in Carr Mill Mall. Admiring his diligence, Lucy donated money to Jacques Menasche’s organization and eventually worked on the design elements.

Lucy loves promoting other people. She has mentored, advised and provided financial support for children and young adults in her community. She also writes letters of recommendations for local students applying to Swarthmore College. 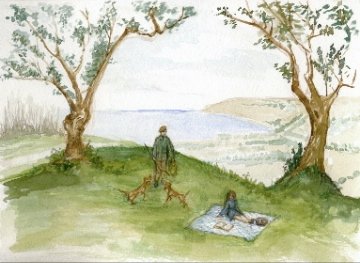